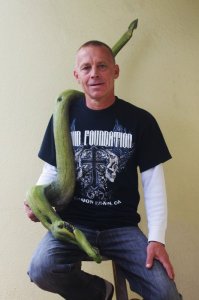 Liquid Foundation has a long history in the San Diego community, and in several ways, around the world. Liquid Foundation began as an aspiration by Todd Bartlett. In his earlier years, Todd was employed at a restaurant. But being an avid surfer, he eventually decided he wanted to get involved in the surfing industry. So he left his restaurant job and took cut in pay to work for Sam at Breakers Surf Shop. There he was able to get exposure in the industry and the learn what it takes to make a good surf shop. Then in 1991, Breaker surf shop suddenly packed up and moved their shop to north county and Todd took the opportunity to start his own shop which became Liquid Foundation.

The newly formed LF had humble beginnings but soon became a powerful success with the performance and growth of the shop’s tight-knit surf team. And as the team grew in success and numbers so did the surf shop. Within just four years the surf team went from 6 team riders to 25 in total. Several of these riders started off as underaged teenagers exposed to rough neighborhoods, which Todd was able to give them a healthy alternative lifestyle and a new self confidence that has had lasting effects for their lives. And even a few of the original team riders still surf for Liquid Foundation to this day. 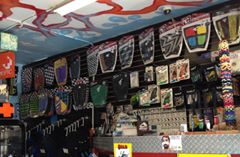 In 1993 Todd was able to relocate the shop across the street to a much larger location. Then in 1994 Todd began designing his own brand of LF labeled clothing and gear to accommodate the local style of the surfers in Mission Beach. This quickly became a success and as the new clothing lines were brought to the big trade shows, Todd was able to establish himself, and the Liquid Foundation name, in the surfing industry across the world. Buyers were ordering Liquid Foundation clothing from all over the US and even internationally to places like Japan, Europe, and Central America.

This business continued to thrive through the new millennium as the clothing and gear continued to sell, and the LF surf team continued to make surf videos and win contests. But the sting of the US economic crash was felt when in 2009 falling sales forced the business to make serious cutbacks in many of the business practices. Then downsizing of the physical location was necessary to keep the doors open through 2010 and beyond. Being a savvy surf shop owner, Todd did everything he could to be true to his customer base and make sure to keep people surfing, year after year. And when his love of wood sculpting grew, along with a desire to spend much more time with his family, Todd decided to sell his beloved surf shop business.

In February of 2014, Todd approached local Mission Beach surfer and business owner Matt Gardner with an offer to sell Liquid Foundation. The sale was provisional that the promise was made to keep the LF name alive and continue serving the surfing communities of San Diego and it’s visitors with the surf shop they have known and loved for years. This was an easy decision for Matt to accept as an avid fan of Liquid Foundation and a collector of LF clothing. And like few deals are made these days, they accepted each others’ terms on a handshake and good faith.

Since Liquid Foundation’s new ownership, the business has undergone several practical changes while still keeping the core values that has made the shop succeed in the past. The surf team was revitalized and back on the competition circuit. And a new clothing line process has been started and is due to launch in Spring of 2015. Like it always has been, Liquid Foundation is still staying true to their Mission Beach roots and much more exciting history has yet to be written about this iconic business.

Liquid Foundation has evolved from a store into a brand. You can find all of our gear online now at shop.LFsurf.com and hopefully soon at your favorite surf shop. For those of you who loved the store, so did we. But we believe that this new direction is good for the surf team, for the creation of new great gear and overall good for LF.